Rep. Kenneth Gordon joined his colleagues in the Massachusetts House of Representatives to pass legislation that seeks to reduce tobacco use and nicotine addiction among youth across the Commonwealth.

An act to protect youth from the health risks of tobacco and nicotine addiction, H.4479, will prohibit the sale of all tobacco, including nicotine delivery products and other vapor products to individuals under the age of 21. Additionally, the bill expands Massachusetts’ Smoke-Free Workplace Law to include e-cigarettes and vapes, thereby ensuring that all tobacco and vapor products will be banned in establishments where the use of traditional tobacco is currently prohibited.

More than 170 cities and towns in Massachusetts have already raised the minimum sales age for tobacco products to 21 years old. With this legislation, Massachusetts will join five other states who have established a statewide minimum sales age of 21, including California, Hawaii, Maine, New Jersey and Oregon. Needham pioneered this movement in 2005 by becoming the first municipality in the country to raise the tobacco sales age to 21.

“Plenty of research shows at 18 years old our brains may be more susceptible to addiction,” Gordon said. “I’m especially pleased this bill covers e-cigarettes or ‘vaping’ which introduces a sweet tasting and highly addictive form of nicotine attractive to young people.”

Representative Ken Gordon (D-Bedford) joined his colleagues in the Massachusetts House of Representatives in passing its budget for the Fiscal Year 2019 (FY19) last week. In addition to local aid, the over $41.065 billion spending bill targets areas such as education, health and human services, housing and homelessness, and veteran services.

In addition to funding important programs and services throughout the Commonwealth, the House FY19 budget included important local aid and Chapter 70 Education funding increases for the Twenty-First Middlesex District.

“I am proud of this fiscally responsible budget that ensures our cities and towns have the resources they need to operate at the highest standard. We are once again following through on our promise to protect local aid and assistance to our schools” said Rep. Gordon.

The House appropriated funding pursuant to another Rep. Gordon amendment, which will be used for the education of the children of military families who live on Hansom Air Force Base and attend Bedford Public Schools.  Rep. Gordon joined Senator Mike Barrett in the 2015 session to pass a law that requires the Commonwealth to reimburse the town for the education of the military students, but the law is subject to appropriation.

Bedford will kick off Memorial Day this year in a special way, as Gov. Charlie Baker and Congressman Seth Moulton will come to town to honor two fallen heroes, Pfc John Hart and Lance Corporal Travis Desiato, by naming a bridge in their honor.  The ceremony will commence at 4 p.m. on Friday, May 25, at the boat launch beside the bridge on State Road 225 that spans the Concord River.

The dedication was arranged by Senator Mike Barrett (D-Lexington) and Rep. Ken Gordon (D-Bedford), who carried the bill dedicating the bridge in honor of these heroes through the legislature.  Governor Baker signed the bill into law in December.

The soldiers were killed within 13 months of each other in Iraq, fighting the war on terror.  Hart, who served in the Army, lost his life in an ambush in Tikrit on October 18, 2003.   He graduated from Bedford High School in 2002.  Desiato joined the Marines after his graduation from Bedford High in 2002.  He was lost on November 15, 2004, in Fallujah.

“Each year we remember our fallen heroes on Memorial Day, but this year will be special in Bedford,” said Rep. Gordon.  “This year we will pause to be with a family and recognize a town that has given so much.  As Memorial Day weekend approaches and the tumult of travel begins for some, Bedford will slow down and reflect.”

The bill, an act relative to criminal justice reform, includes many provisions championed by Barrett to address fines and fees that engulf criminal defendants, a problem he has highlighted in his own work. It also includes reforms led by Gordon that allow first-time offenders in some situations to avoid prosecution in a program called Restorative Justice. The legislature also passed an accompanying bill, an act implementing the joint recommendations of the Massachusetts Criminal Justice Review, which is designed to complement the comprehensive criminal justice reform legislation. This bill allows individuals to earn early release by participating in recidivism-reduction programs.

“The compromise states that a defendant may not be incarcerated for failure to pay fees if paying would cause severe hardship,” said Barrett. “People are guaranteed a right to a lawyer at ‘fine time’ hearings and defendants deemed indigent will have an associated $150 fee waived.”

“This compromise legislation takes a measured approach to criminal justice, increasing the penalty for such offenses as trafficking in fentanyl and carfentanil, synthetic opioids that threaten our community, while providing an avenue for people with low-level, non-violent drug offenses to get the help they need,” Gordon said. “It increases the penalties for serial offenders convicted of drunk driving but eliminates mandatory-minimum sentences so that discretion can be restored to judges who preside in our courts.” 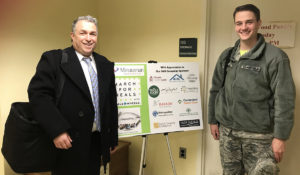 Representative Ken Gordon prepares to deliver meals to homebound seniors in Bedford for Minuteman Senior Services’ Meals on Wheels Program, a valuable community service that provides a safety check and friendly visit as well as a nutritious meal.

Community Champions nationwide are volunteering their time this month in an outreach effort designed to draw attention to senior hunger in our communities, to recruit volunteer drivers and to raise needed funds.

The “Me Too” movement is sparking state governments across the nation to take action against sexual harassment. Massachusetts lawmakers hope to reduce instances of sexual harassment in the workplace through a bill filed by Majority Leader Cynthia Creem, (D) Newton.

BURLINGTON – State Rep. Kenneth Gordon (D-Bedford) recently visited the Planning Board to update them on the state of transportation in Burlington.

As Rep. Gordon said to the start discussion, he was in front of the planners to update them on the state of transportation and how it’s affecting Massachusetts and Burlington.

He started off by detailing the “bad news” which chiefly focused on the lack of money available for transportation projects.

“We have been dealing with a deficit with the Massachusetts Department of Transportation (MassDOT) Operating Budget for a while,” informed Rep, Gordon. “Large amounts of money are hard to come by, but [Massachusetts Gov. Charlie Baker] is continuing to look into it.”

Rep. Gordon mentioned the “new transportation plan” devised by the White House limits the amount of funds for industrialized states, which includes Massachusetts. As has always been the case, the Federal Government grants autonomy to states to run their transportation programs.

The Attorney General will receive increased power to investigate and enforce Massachusetts’ sexual harassment and discrimination laws, and clouds of secrecy will be lifted in cases involving serial harassers, if identical bills filed by Representative Kenneth Gordon (D-Bedford) and Senator Cynthia Stone Creem (D-Newton) are passed.

Co-sponsored by 43 fellow Senators and Representatives, HD4496 and SD2493 will give the AG pre-suit subpoena power and investigative authority in sexual harassment and discrimination suits.  The AG currently has such authority in the areas of consumer and financial fraud.  It also requires the Massachusetts Commission Against Discrimination (“MCAD”) to alert the AG each time it issues a probable cause finding against an alleged harasser two or more times in five years, or three or more times in seven years.  Once the notice is forwarded to the AG, each probable cause finding will become available as a public record with the victims’ names removed.

“The #metoo movement has empowered women throughout the country to take a stand and say #nomore,” said Senator Creem.  “As more and more women are coming forward, it’s become increasingly clear that we need better tools to fight sexual harassment and protect people from recidivist offenders.  While confidentiality agreements can often benefit both parties, they should not be used to shield serial offender. ”

“Many of us want to get to the bottom of allegations involving multiple instances of harassment.  We are frustrated by confidential settlements that prevent victims from telling their story,” said Gordon.  “However, victims often rely on these agreements as a tool to resolve their claims short of a public trial and we don’t want to interfere with their ability to address the emotional and financial harm they have suffered.These bills propose a way to figure out how to discover who is engaged in serial harassment without upsetting the rights of victims to resolve their cases”.

“The MCAD does a good job handling matters involving one-time harassment and discrimination cases, and this bill leaves those cases alone.  However, if the MCAD credits more than one charge against an alleged harasser in the relevant window of time, the findings will be made available to the public.  That means that after even one credited allegation the accused person has to be wary of any future allegation, since a public record will be created.  That record will follow the alleged harasser, as it will be subject to review by any future victim, and available for any future job interview.”

The bill proposes its relief as an amendment to Chapter 151B, which affects all employers except religious entities.  It would take effect upon passage, affecting only future complaints.

Representative Ken Gordon is accepting applications for college level internships in his office during Summer 2018. Internships at the State House are unpaid.

While each internship is unique and largely reflects the interests of the intern, the following provides a broad outline of the program:

Interested applicants should submit the following to Cody.Case@mahouse.gov by April 30th:

The bridge on Carlisle Road spanning the Concord River will be re-named this Memorial Day, dedicated in honor of two Bedford natives who died serving in Iraq.

Pfc. John Hart and Lance Cpl. Travis Desiato were both graduates of Bedford High School and were killed in the line of duty in Iraq. On Friday, Dec. 22 state representative Ken Gordon, D-Bedford, and state senator Mike Barrett, D-Lexington, announced that next Memorial Day, the bridge on Carlisle Road will be dedicated and named after the two men. Gordon and Barrett filed the bill and Gov. Charlie Baker signed the bill last week.

“We are a town of 14,500 people, and we had two heroes who knew each other, die in action less than 15 months apart,” Gordon said. “During the Memorial Day ceremony in 2017 I spoke with the families of both men and they were talking about a way to honor the men, and I thought it was a great idea. Since I’m a state representative I knew we could do something on a state road, so we decided to dedicate a bridge.”